Don’t let them
Get away with it!

Make sure they make
the Ripoff Report!

Phony Ad using Ellen DeGeneres
& hundreds of other A-list Stars...
Celebrity Skin Cream wrinkle cream rip-off advertisements US Based and Foreign companies bilked consumers out of Hundreds of Millions of dollars over the past 7 years
WHAT IS YOUR STORY?
ARE YOU A VICTIM?
FORMER EMPLOYEE?

What the BBB has done to consumers for over 100 years is one of the many reasons why Ripoff Report was created.

Show customers why they should trust your business over your competitors...

Add Rebuttal to this Report

← Is this
Report about YOU listed on other sites? Those sites steal Ripoff Report's content. We can get those removed for you! Find out more here.
How to fix Ripoff Report
If your business is willing to make a commitment to customer satisfaction Click here now..

This is a tax preparation scam website run by a Costa Rican girl (Mila Gamboa, AKA Milagro Gamboa, AKA Maria Gamboa, AKA Mila Miranda, AKA Maria del Milagro Gamboa Miranda) and her Canadian boyfriend (Darren Olstad).  It is based in Costa Rica.  The scammers use social media (facebook, etc.) to recruit their victims, who are mostly international students who have studied in the U.S. and don't know how to file their taxes.   In short, once their victims hand over their tax information, the tax refunds are diverted into another account, never to be seen again.  When victims complain, they are given all sorts of BS excuses and are told they are being "selfish" and "greedy" for asking for the money that is rightfully theirs, AND that has already been deposited by the IRS into the scammers' bank account(s).

This scam was formerly known as instanttaxback.com.  Likely due to the number of complaints, they changed their name this year to simplestudentrefund.com.

This report was posted on Ripoff Report on 02/25/2014 08:44 PM and is a permanent record located here: https://www.ripoffreport.com/reports/mila-gamboa-and-darren-olstad-simplestudentrefundcom/select-stateprovince/mila-gamboa-and-darren-olstad-simplestudentrefundcom-milagro-gamboa-aka-maria-gamboa-s-1126568. The posting time indicated is Arizona local time. Arizona does not observe daylight savings so the post time may be Mountain or Pacific depending on the time of year. Ripoff Report has an exclusive license to this report. It may not be copied without the written permission of Ripoff Report. READ: Foreign websites steal our content

If you would like to see more Rip-off Reports on this company/individual, search here:

Report & Rebuttal
Respond to this report!

This is a grossly false complaint made about my clients which was suspiciously posted by someone who conveniently remained anonymous, most likely a competitor. Our firm is currently in the process of discovering the identity of this anonymous poster to bring a defamation lawsuit against on behalf of Ms. Gamboa and Mr. Olstad.

Anyone reading this who knows the identity of this poster and helps expose the fraud will be compensated monetarily by my clients.

However, the following points make it extremely clear that the anonymous posts are clearly lies, solely intended to damage the reputation of my clients and the success of their ventures.

1) No criminal charges or civil suits have ever been filed

If these accusations were true and Student Refunds LLC really was stealing its client's tax refunds as described, the company would have been indicted by either the federal government or the local district/state attorney’s office as there certainly would be hundreds of complaints filed against a company which served thousands.

A company based in the US that processes tax returns must:

While that alone should be convincing enough, it furthermore should be stated that not one lawsuit has ever been filed for “stealing” or misappropriating tax refunds. If the accusations really were true with numerous victims, there would be some type of lawsuit against my clients. The actual, verifiable truth is in the 7 years since the company began in 2009, not a single criminal charge or civil lawsuit exists against Mila Gamboa, Darren Olstad, Student Refunds LLC, Instanttaxback in any American or foreign Court.

From a customer service standpoint, anonymous posters should draw suspicion. Most people that were truly wronged would not want to hide behind the internet where the company cannot reach them to resolve the issue. In the era of online business, client satisfaction reigns supreme and Student Refunds was no different.

This anonymous poster did not even provide contact information to even give Student Refunds a chance to rectify whatever wrong that poster believed they had suffered.

As Student Refunds progressed, the student tax refund market became saturated by competitors fighting for the student demographic and it's likely that this post was created by a startup competitor.  This niche became quite lucrative which eventually led H&R Block to pursue an acquisition of my client’s business. Student Refunds and the majority of other similar businesses eventually moved into other niches because they could no longer compete with the large companies such as TurboTax which drove margins down by leveraging multi-million dollar softwares.

If this really were a systematic scam designed to “divert” their client’s tax refunds as the poster alleges, there would be a multitude of accusations from the numerous victims. However, all that exists is this single accusation from this anonymous poster, most likely a competitor or someone who felt threatened by the growing success of Mila Gamboa.

4) No Specific Facts or Damages Stated

There is not one mention of whether the anonymous poster believes they are in fact a " victim" or rather if they're just voicing a personal (unsubstantiated) opinion of their own. There are neither any dollar amounts disclosed nor any stories of the exact harms suffered, rather just vague generalities which could be said about any business.

The poster claims this is a business scam based in Costa Rica. The absurdity of this is laughable and once again proves the poster was not a client of Student Refunds LLC. As previously mentioned, the IRS will not deal with a foreign business for processing tax returns (Legal requirement).

If this company really was based in Costa Rica, they would not have been able to process the 1000's of US tax returns that were legally processed.   Rather, because Ms. Gamboa is a Costa Rican citizen, the poster took a “best guess” approach and assumed it must be a Costa Rican business. All clients of Instanttaxback.com (merely a web domain property) knew that they were dealing with the legally registered US based corporation called Student Refunds LLC.

The poster also tried to paint the picture that Student Refunds changed its name from instanttaxback.com to simplestudentrefund.com "due to the number of complaints."

The reality is in online business it is very common for companies to have multiple web domains to market via different channels. For example, Amazon.com also sells via Zappos.com and www.6pm.com.  The legal business name was Student Refunds LLC, which anyone who actually did business with Instanttaxback.com would find out in the customer agreement and emails. Instanttaxback was one of several web properties my client’s used to market the service in different regions.

The anonymous poster creates an illusion that Ms. Gamboa has multiple names or "aliases," however Latin American custom is to have two first and two last names. Her full name is “Maria Del Milagro Gamboa Miranda” aka Mila Gamboa Miranda.

8. The Truth Behind Student Refunds LLC/InstantTaxback.com

With regard to Mila Gamboa Miranda and Student Refunds, this is the verifiable true, factually verifiable story.

Student Refunds LLC (InstantTaxback.com) is a true American, rags-to-riches success story. The hero of the story and founder of Student Refunds, Mila Gamboa, grew up in rural Costa Rica, often without food and sharing a single pair of shoes with her sister. Despite her humble beginnings, she managed to save enough money to study abroad in the US where she built her first business, Student Refunds LLC from her laptop.

The business went viral and helped 1000’s of students claim millions of dollars in well-deserved tax refunds which otherwise would have gone unclaimed. SR’s success skyrocketed and grew at a rate over 400%, year after year. SR formerly dissolved in 2013 after an acquisition by H&R Block due to SR’s inability to compete with software developed by tax giants such as Turbo Tax & Tax Act.

In 2010, Entrepreneurs Org. (www.eonetwork.org) named Mila Gamboa (at age 20) Central American Student Entrepreneur of the year. Student Refunds LLC carried her to the finals at the 2010 “Global Student Entrepreneur of The Year Awards” to compete against 45 other countries and later to travel the globe sharing her real-life rags-to-riches experience. The many brilliant men and women who volunteered to mentor and guide the venture, including senior members of Ernst & Young, H&R Block, & Entrepreneurs Org shows how much of an impact the business made on the lives of so many students. Student Refunds remains a very cherished memory for the founding team and is held in the highest regard by clients globally. 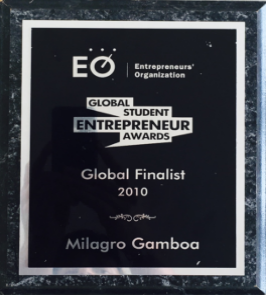 On behalf of Ms. Gamboa and Mr. Olstad,

Anyone who has information which will lead to the identify of this anonymous poster to help facilitate the defamation lawsuit will be generously compensated for their assistance and for doing the right thing in helping expose these heinous lies.

Respond to this report!

Don’t let them
Get away with it!

Make sure they make
the Ripoff Report!

Phony Ad using Ellen DeGeneres
& hundreds of other A-list Stars...
Celebrity Skin Cream wrinkle cream rip-off advertisements US Based and Foreign companies bilked consumers out of Hundreds of Millions of dollars over the past 7 years
WHAT IS YOUR STORY?
ARE YOU A VICTIM?
FORMER EMPLOYEE?

What the BBB has done to consumers for over 100 years is one of the many reasons why Ripoff Report was created.

rcforevery Ethiopian Hydrophane Opal they offer online is a SCAM!!! Sent Amazonite instead. Do NOT buy anything from rcforevery.com

Dennis Rodriguez, Renovating Riches LLC took loan from me to fix/flip the house but never paid me back and never fixed the house, Fulshear Texas
How To Feature Your Report Like Above >>

Empire Today They damaged the walls when installing my flooring. Now refusing to fix it stating they didnt do it. Nassau New York

Tatev Savach Tata, left me with the additional vet bills, cremation of the dog & no money back or no dog. Nothinggg! DIED in less than 2 WEEKS. Miami FL.

Dealer in Colorado Eagle Carports Danilo Quintero CSB DEALER in CO Danilo Eagle Carport They took my deposit money $1041.75 and I couldn't keep the carport. CO, NC
How To Feature Your Report Like Above >>

Advertisers above have met our
strict standards for business conduct.